A Legacy for the Community 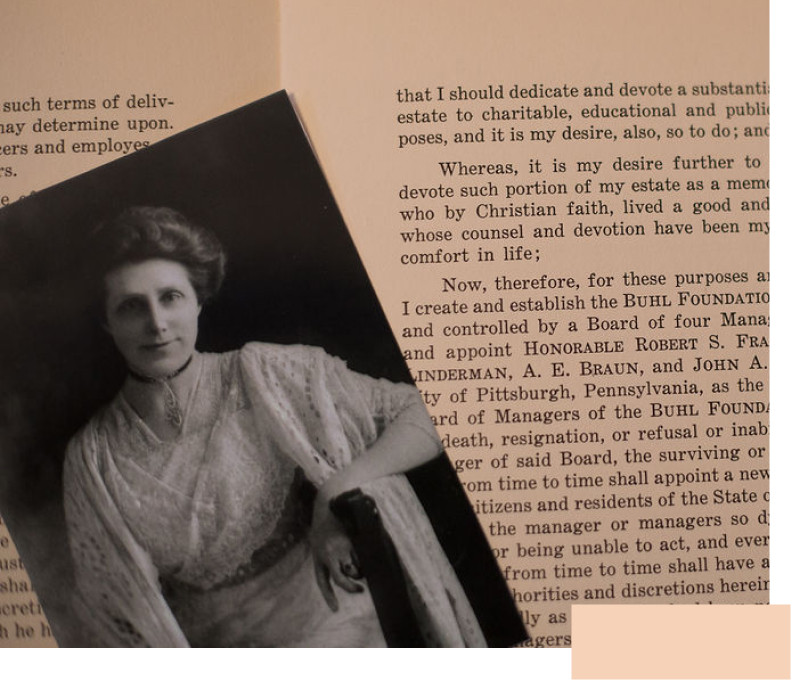 A Memorial to Louise

Upon his death in 1927, Henry Buhl, Jr. established the Buhl Foundation as a memorial to his beloved wife, Louise C. Buhl. It was his desire that the Foundation be especially concerned with the “well-being of the citizens of the City of Pittsburgh, and the County of Allegheny.”

The Board of Managers, appointed in Mr. Buhl’s will, were given freedom to distribute the Foundation resources in a way that was “responsive to the needs of the time” with particular focus on the community of Pittsburgh, creating the first multipurpose foundation in the city. The principles and vision instilled in the Foundation at the beginning have remained true to this day

After Foundation operations began on June 1, 1928, the then president of the Carnegie Corporation referred to it as a model for an endowment broadly conceived as to purpose, but with special reference to the needs of a given locality.

From its inception to today, The Buhl Foundation has remained focused on these key areas.

The Buhl Foundation’s first year of grants were made in support of the areas of economic development, education, recreation, and social research. One of the significant grants in that first year was used to establish a pension fund for the employees of Boggs and Buhl, continuing Henry Buhl, Jr.’s legacy of care.

In 1937, the Foundation provided an initial grant to the Pittsburgh Symphony Society to support the establishment of a symphony orchestra for the city. In more recent years, a grant was provided to revitalize the Harris Theater, creating a lively cultural attraction in the heart of the Cultural District.

Maintaining and encouraging a sense of pride for the city of Pittsburgh continued through the years. In the 1990s, a system of way-finding signage was funded to make the city more accessible to residents and visitors. During that same period, funding for the WQED History Series produced by Rick Sebak resulted in engaging videos that increased market appeal for the Pittsburgh community.

After interviewing thousands of residents from Pittsburgh’s 18 Northside neighborhoods and asking the question, “What does it take to live a dignified life?”, the Foundation established a strategic, long-term initiative in 2014 to invest substantially in the reinvigoration of Henry Buhl, Jr.’s beloved Northside, where he lived and worked.

In 1937, the Foundation financed a survey of Pittsburgh’s social condition, resulting in the book, A Social Study of Pittsburgh by Philip Klein. The results challenged the prevailing perception of most industrialists in Allegheny County, revealing the unmet needs of lower income and minority communities. The Foundation’s aim was always to serve and improve the quality of life of all Pittsburgh residents. As such, the study provided the necessary direction as to where the Foundation would invest.

In subsequent years, the Foundation sustained a belief and practice that data should inform public policy and private philanthropy. It supported research conducted by the Western Pennsylvania Historical Society and the Western Pennsylvania Economy League. The Foundation also invested heavily to advance science in the region with generous grants to the University of Pittsburgh and Carnegie Institute of Technology (now Carnegie Mellon University) for pure and applied science research. 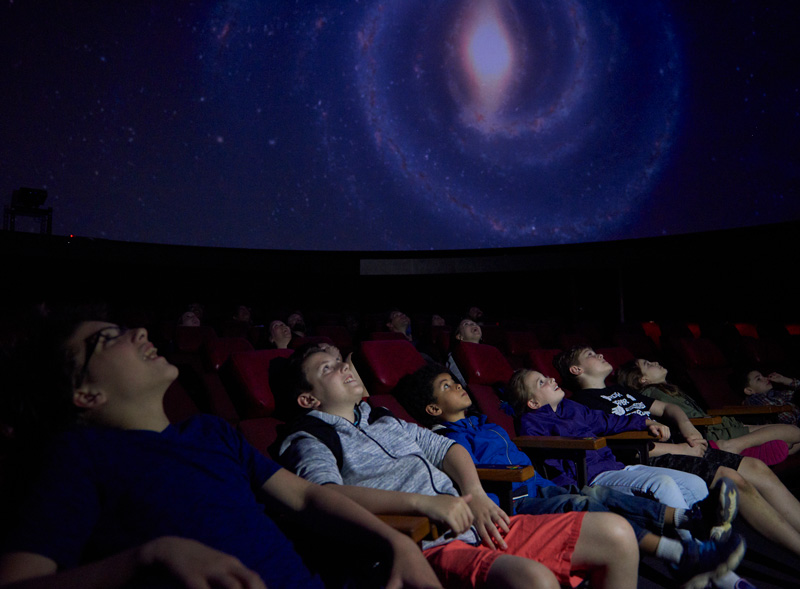 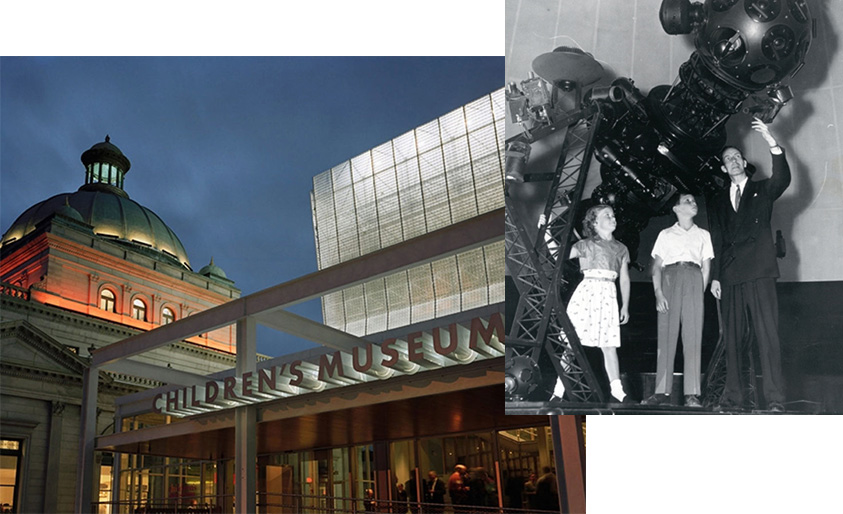 After funding initial construction, start-up costs, and operations of the Buhl Planetarium and Institute of Popular Science, the Foundation donated it to the City in 1939. Throughout the years, the Foundation continued to provide funding for the Planetarium, totaling nearly $6 million, until it merged with the Carnegie Science Center in 1991. To this day, it remains an integral institution for both the City and the Buhl Foundation. The Science Center itself is overseen by the Museum Director who holds the Henry Buhl, Jr. Chair, a professional chair funded by a grant from the Buhl Foundation.

Many other civic agencies contributed heavily, but foremost among the leaders in the drive for a better Pittsburgh between 1928 and 1945 were the Managers and Directors of the Buhl Foundation.

Professor Donald J. Lisio of the University of Wisconsin in his book, Investing in Pittsburgh’s Progress: The History of the Buhl Foundation.

Founded at the cusp of the Great Depression, one of the Foundation’s first projects was Chatham Village. Designed to be a national housing model while providing opportunities for employment, Chatham Village offered families homes to rent and a place for community until a more buyer-friendly economy emerged. Designated as a National Historical Landmark in 2005, the Chatham Village project has been studied and visited by planners and architects from all over the world, including two similar projects in New York City and Los Angeles.

In the 1990s, the Foundation sought to provide all citizens in the region with better access to information and technology through libraries. This began with the support of automation within colleges and universities, followed by leadership grants introducing information technology as an asset for public libraries. The Foundation further supported the establishment of the Allegheny County Library Association (ACLA) which has proven to be an impactful advocate for member libraries. 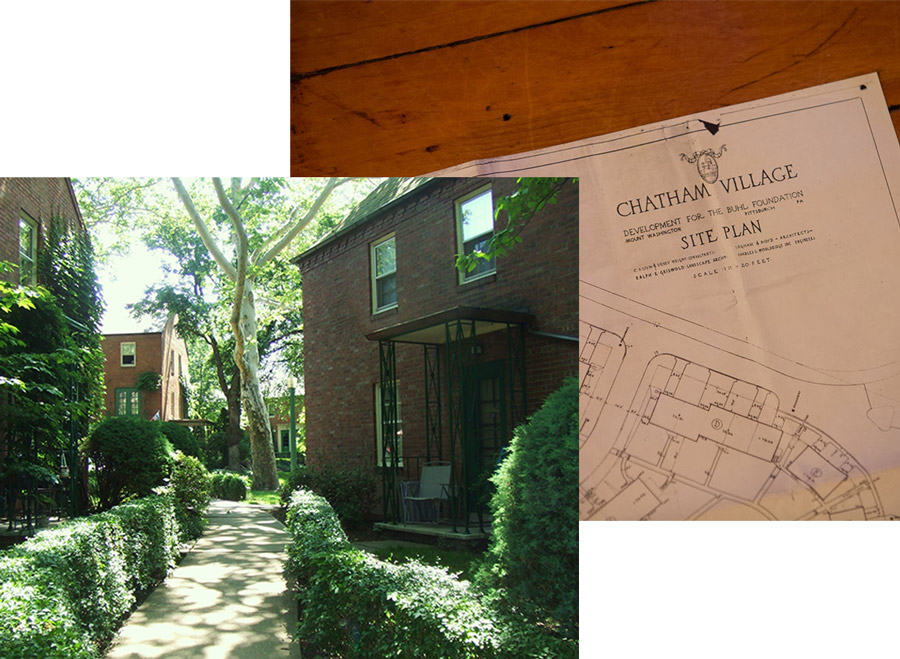 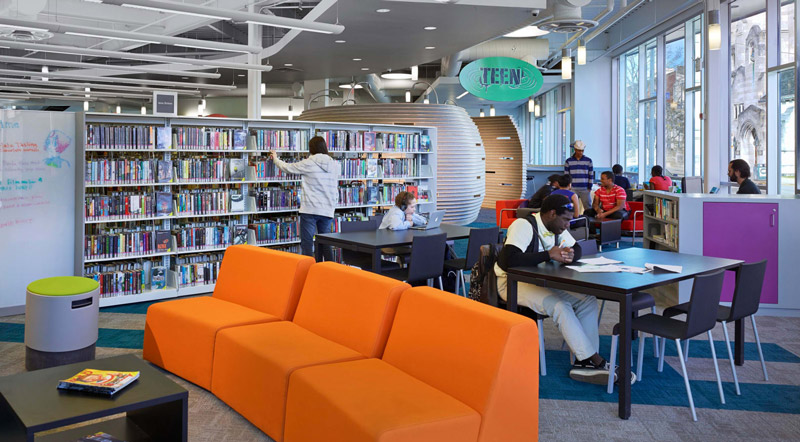 With similar concern for the well-being of the community, in 2014 the Foundation began a geographically focused, long-term initiative to invest in the lives and futures of Pittsburgh’s Northside residents. Improving upon and building structures needed to connect individuals and organizations to create a thriving community, One Northside aims to not only serve our city, but to also act as a model and guide for communities throughout the country.